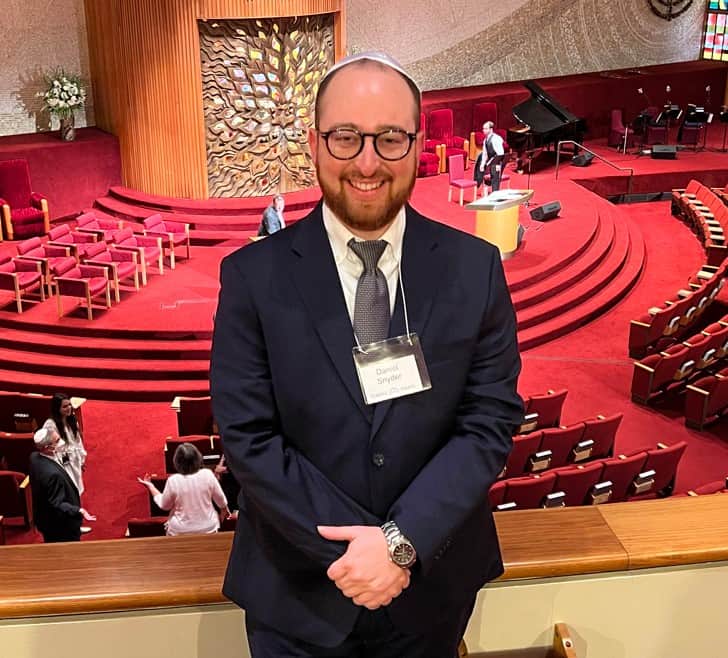 In the periodic series My Jewish Journey, community members share the story of their personal relationship with Judaism, Jewish identity, and Jewish life. Told their way and in their words, these stories are as unique and distinct from each other as the storytellers themselves, and together will begin to tell the colorful and multi-textured story of Jewish Memphis.

I grew up in the small city of Crystal Springs, Mississippi, where I was the only Jewish kid, just like that Adam Sandler song. While I was the only Jewish kid in the county and school system, my family and I were only 30 minutes away from the synagogue in Jackson, Mississippi, which was home to about 200 families. We were also conveniently only 22 minutes away from URJ Jacobs Camp. Rabbi Jeff Dreifus and I were on staff at Jacobs camp at the same time. I think I will forever hold the all-time closest camper-counselor record. I was also a five-year staffer, so I received the coveted five-year jacket.

Around that same time, in 2009, I helped co-found the Hillel at Mississippi State University, where my father was a professor. I made a lot of great friends, but there was no Jewish student organization or Hillel. So, we got one going and 10 years later, it’s still running. That legacy is one of my prouder achievements in my Jewish journey. And that was just the start.

From there, I was able to expose myself to opportunities to lead in the Congregation B’nai Israel synagogue in Columbus, Mississippi, which is 20 minutes from Starkville. After I graduated, I was the vice president of that synagogue. During my college tenure, I took advantage of co-op opportunities to live in the Mississippi Delta where I worked at Baxter Healthcare, but there was also a synagogue out there in Cleveland, Mississippi, where Rabbi Danziger, Emeritus Rabbi of Temple Israel, would come down once a month and lead us in services. I got exposure to a Memphis rabbi before even knowing I would be in Memphis.

During college I also tutored two teenagers for their B’nai Mitzvah service, including the child of John Cohen, Mississippi State’s baseball coach who had played baseball for the team in the late 80s and is now the athletic director at Auburn. A call had been put out to the Hillel group for tutors, and I jumped on the opportunity. I was paid in dinners, so once a week, I got to have dinner with Coach Cohen. As a sports fan, it was a cool opportunity to pick his brain and get to know the family. In turn, they were eager to support the Hillel and would host us for a Hanukkah party or have everyone over once or twice a year. It was a fortuitous and timely relationship built through our connection to Judaism.

After graduating, I worked for a few years in a small tire factory in the Starkville area but grew tired of being the only Jewish 20-something who wasn’t in college. FedEx had always been on my radar, and someone urged me to apply. Several of my camp friends were from Memphis and I had been before. I was aware of the prominence of Memphis as a player in the region. So, I took the interview, and within 30 days, I was packing up my bags.

The day after I got here in 2016 I went straight to the JCC. I remember that day very clearly, and I said, “Hey, I want to coach soccer.” They were like, “Who is this guy who comes in on the day of their interview and volunteers already?” I came to Memphis with this history of being involved in Hillel and synagogues, so I wanted to make an impact on day one. I wanted to get entrenched in the community. I coached soccer for three seasons, and we only lost three games. I’m very proud of those boys. Now, all those kids are in high school.

In the spring of 2017, I participated in Memphis Jewish Federation’s inaugural Kay Usdan Saslawsky Institute for Ethical Leadership, a curriculum designed to nurture leadership through sessions using case studies and Jewish texts and taught by local thought leaders and clergy. That was a great experience and a great opportunity to connect with some of the middle and older generations of the community. I was also featured in the Seventy Faces exhibit during Federation’s Israel@70 campaign. And now, I’m a member of the Federation board, serving an organization that serves as a sort of hub of Jewish Memphis, doing important work in all corners of the community.

I have been honored to serve on Federation’s Hillels of Memphis advisory board. I was asked to help because of my experience forming a Hillel at Mississippi State, and also because I used to write for the Jewish Scene magazine which is owned by Susan Neiman. Susan had stepped in as the interim director when the previous Hillel director retired, and she asked me if I would come on and provide assistance. I’ve held an advisory role ever since and I was on the committee that selected the current Hillel director, Sophie Bloch, who has done an amazing job.

I also served on Temple Israel’s ConnecTI board with Cara Greenstein and Baylee Less and others of that generation. I’m happy to see how it’s evolved and regenerated even after COVID. While other social groups that filled a need during COVID faded away, this program is not going anywhere.

Recently, I began serving on the Temple Israel Brotherhood board as a sort of liaison between ConnecTI and older Temple members. Young folks, and maybe especially young men, who are turning the corner around 30, but don’t have families – we’re kind of in between groups. So, there is a gap and an underserved area of young adults, and I feel it’s worth the extra effort to bridge that gap.

I’ve been in Memphis for seven years now – a quarter of my life – and I’m very thankful for those years. Memphis is an excellent community and is very welcoming. The fact that in a metro area of more than a million residents, the relatively small Jewish community of 10,000 has a reputation for impacting and influencing culture, business, law, and the very shape of the city is amazing to me. I think it’s because of the Jewish leadership and institutions that we have here acting as the bedrock of our community. It gives Memphis something special that is unmatched. I have yet to find a city on par with Memphis in this regard.