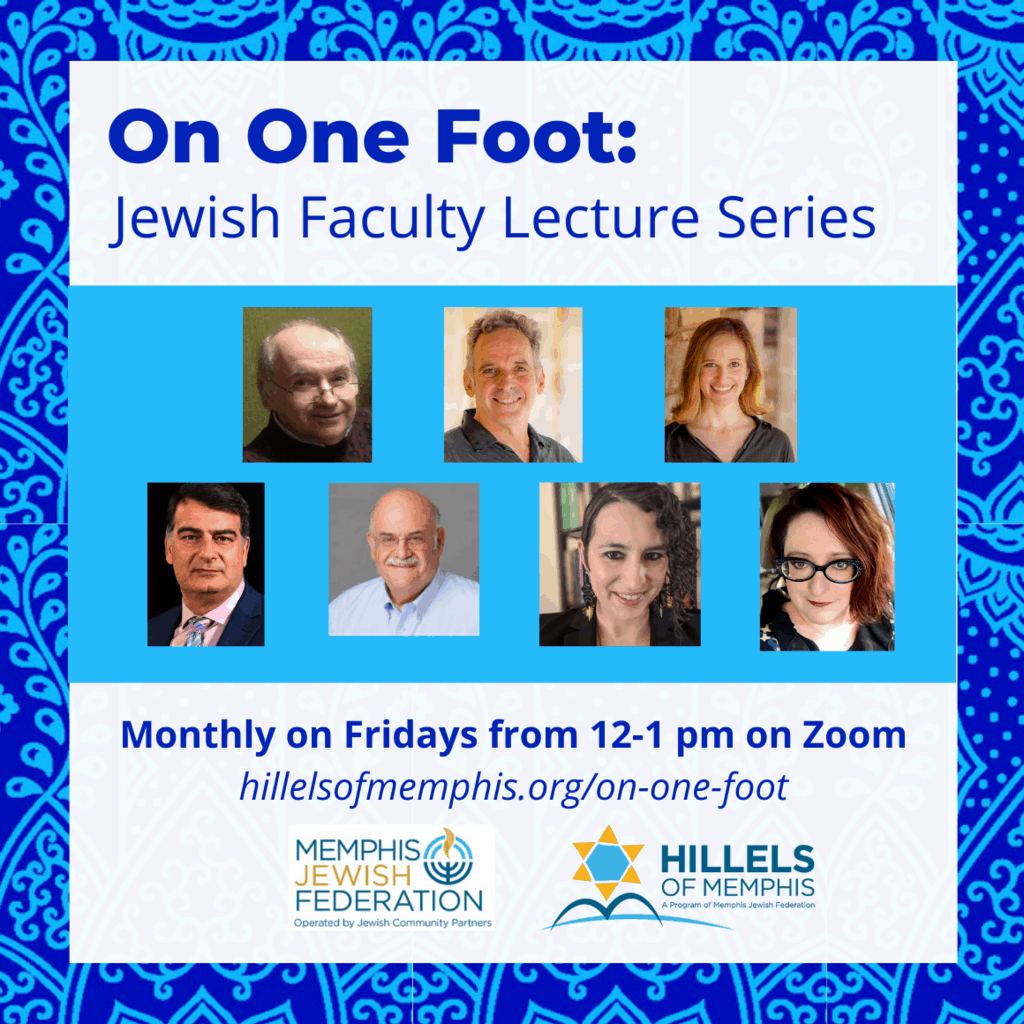 “This is the first time, in all these years, that I have seen the Director of Hillel reaching out and getting teachers involved,” said Harry Samuels, a past President of Memphis Jewish Federation who was instrumental in establishing the first Memphis Hillel as a student at then Memphis State University, and who has remained involved with the program for more than 60 years. “It’s a wonderful thing that she’s done, because involvement is very important in any Hillel. If you can get the Jewish professors involved, it really means something to the students, aside from the benefit of the lectures themselves. I am very supportive of what she has done and I compliment her on her involvement.”

“I’m incredibly excited to continue the Hillels of Memphis Jewish Faculty Lecture Series for another season because it was so popular and well-received last year, not only by the people who attended, but also the lecturers,” said Sophie Bloch, Director of Hillels of Memphis. “My hope and goal for On One Foot is that everyone leaves feeling more connected to the larger Memphis Jewish community and to Hillel as a result of this collaboration.”

“This initiative was created during COVID when there were little to no in-person events happening in the Memphis Jewish community,” said Sophie. “It was also created when we were trying to leverage virtual programming to engage with the community. Despite more events currently happening in-person, we wanted to continue with this initiative because of the great feedback we’ve gotten so far.”

Season 3’s topics are as diverse as the lecturers, whose expertise in history, mathematics, philosophy, cybersecurity, mechanical engineering, and communications will bring the episodes to life. Viewers can look forward to hearing from Jewish professors who have joined their faculties within the past year, with many topics related to current events and issues affecting our daily lives.

“Hillel’s On One Foot Faculty Lecture Series is a wonderful example of the long and proud tradition of Jewish intellectual engagement,” said Professor Eric Gottlieb, a Season 3 lecturer and Rhodes College Math Professor. “It’s an honor to have been asked to contribute. I look forward to a lively exchange about mathematics, and Jewish involvement in mathematics, with participating community members.”

Each hour-long lecture starts at noon, with time included for group discussion. The series is designed for any community member interested in learning and is open to everyone.

“The Faculty Lecture Series is a rare Hillel program that isn’t specifically student-focused. We intentionally created it as a community-focused program for anyone with a student’s curiosity,” said Sophie. “Any adult community member will find the topics intellectually stimulating, and the sessions also give students the opportunity to learn from professors outside of their major or department, and possibly outside of their school as well.”

The sessions are open to the public, but viewers must register in advance. Click here to learn more and register. The lectures will be recorded and posted on the same webpage. Viewers can catch up with the first two seasons now, and watch upcoming lectures the week after their live debut.

“I’m hoping that viewers leave with a sense of connection to the Jewish academic talent at our local institutions, and a renewed perspective of how our religion ties into more topics than we may realize,” said Sophie.