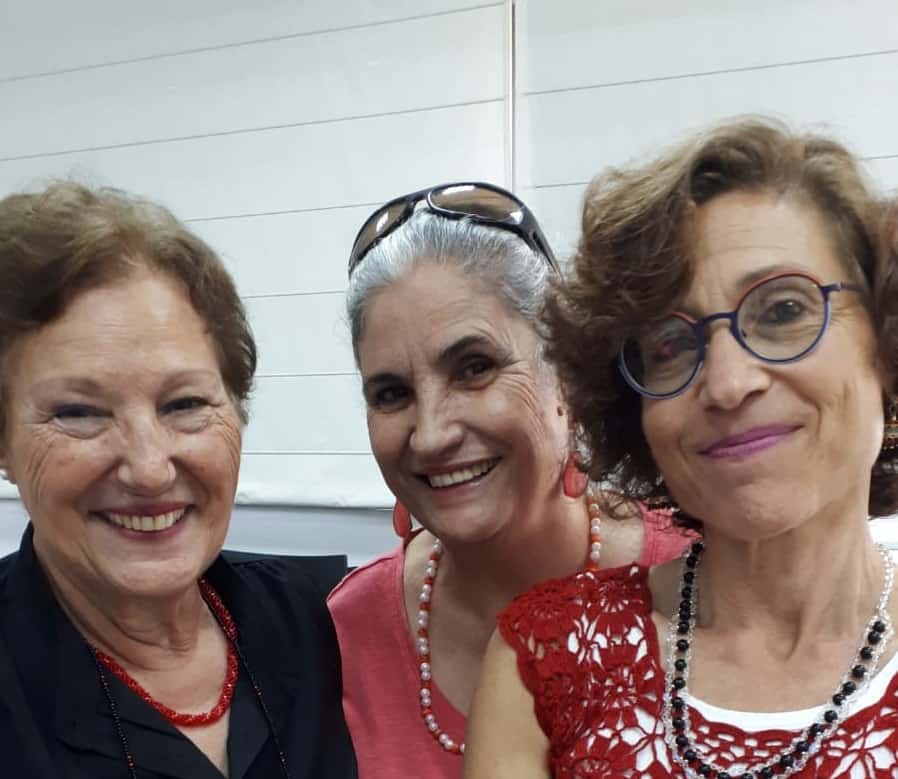 Renowned local artist and arts educator Carol Buchman embarked on an amazing adventure, traveling from Memphis to Shoham, Israel in October, serving as a cultural ambassador on behalf of Memphis Jewish Federation to cultivate connections between the two communities through art. The centerpiece of her visit was a key spot at the city’s annual three-day Muse Festival, a major cultural event taking place during Sukkot.

Memphis and Shoham are connected through the Partnership2Gether Peoplehood Platform (P2G), a program of JAFI (Jewish Agency for Israel). Memphis Jewish Federation launched the partnership in 2016 to facilitate meaningful connections between Israelis and the Memphis Jewish community through unique programs like school “twinning”, teen and young adult leadership projects, programming for young families, and real people-to-people relationships.

“Art can be a cultural descriptor,” said Carol. “Sharing space while you’re doing art is a beautiful way to bond. Art serves as a memory because of what you’re left with.”

Carol’s time in Shoham was immersive and broad. She stayed with a couple and their children in their home; shared meals with them, their friends, and others; met with other artists at their homes and studios; conducted a mosaic workshop at a local senior center; and made public art at the festival, involving Shoham residents in the process.

“I had so many deep conversations with people,” said Carol. “There wasn’t a wasted moment. But I think most importantly, I just felt like I was greeted with the open-hearted kindness of family.”

“Kol Yisrael Arevim Ze Ba-Ze – All Israel is responsible for one another. This is one of the most quoted Jewish phrases,” said Anna Berkman, Israel-based director for the Memphis-Shoham partnership. “The partnership enables us to fulfill this mandate. Through the connections between our communities, we’re creating a safe space to ask the tough questions. We can articulate, sometimes for the first time, what it means to be Jewish for me and also for others.”

A Shoham-based animation artist hosted a gathering of artists in her home, where Carol showed a PowerPoint of her Jewish themed paintings and spoke to the group about her experience as a former New Yorker moving to Memphis and grabbing onto her Jewish identity when it felt threatened in the unfamiliar and largely non-Jewish community.

“I really wondered if this collection of Jewish inspired work would translate and speak to them, because this was a fairly secular group,” said Carol. “I talked for an hour and they barely said a word, and they loved it. At the end we had this incredible discussion, everyone talked about their own story and how they related to it, and things in their society that as artists might make them react. Questioning whether there are things you push back from or towards in your work because of the society that you live in.”

Check out the art she discussed here.

“We talked about them taking their Jewish identity for granted,” she continued. “The vocabulary they use about secular and religious, it’s a different usage of words than we use here. Their version of secular would be considered observant here. Shabbos is a part of their life, holidays are part of their lives, they get a Jewish education. Their whole culture is based on Jewish rhythms. It was really interesting because in my host family’s sukkah, there was an Etrog in a beautiful box, no one touched it, no one said a word about it, almost like it was an heirloom. And they consider themselves to be secular.”

In January, the MJCC Shainberg Gallery will exhibit Carol’s work, some of it created during and after her visit. Two large canvas murals which were conceived by Carol but created by her and countless festival attendees in Shoham will be keystones of the exhibit, as well as work yet to be created and inspired by the new ideas, connections, relationships, and experiences she brought back to Memphis from her journey.

“The Memphis-Shoham partnership is all about making authentic connections between the people of both communities,” said Scott Notowich, Memphis Jewish Federation Vice Chair, Israel and Overseas and chair of the Memphis-Shoham Partnership steering committee. “Art is a language that can be understood by anyone, and is a perfect medium for making these connections. When Carol was selected to go to Shoham for the Muse Festival, we knew we had an ideal ambassador to take Memphis to our friends in Shoham, and the perfect person to bring a little Shoham back home to us.”