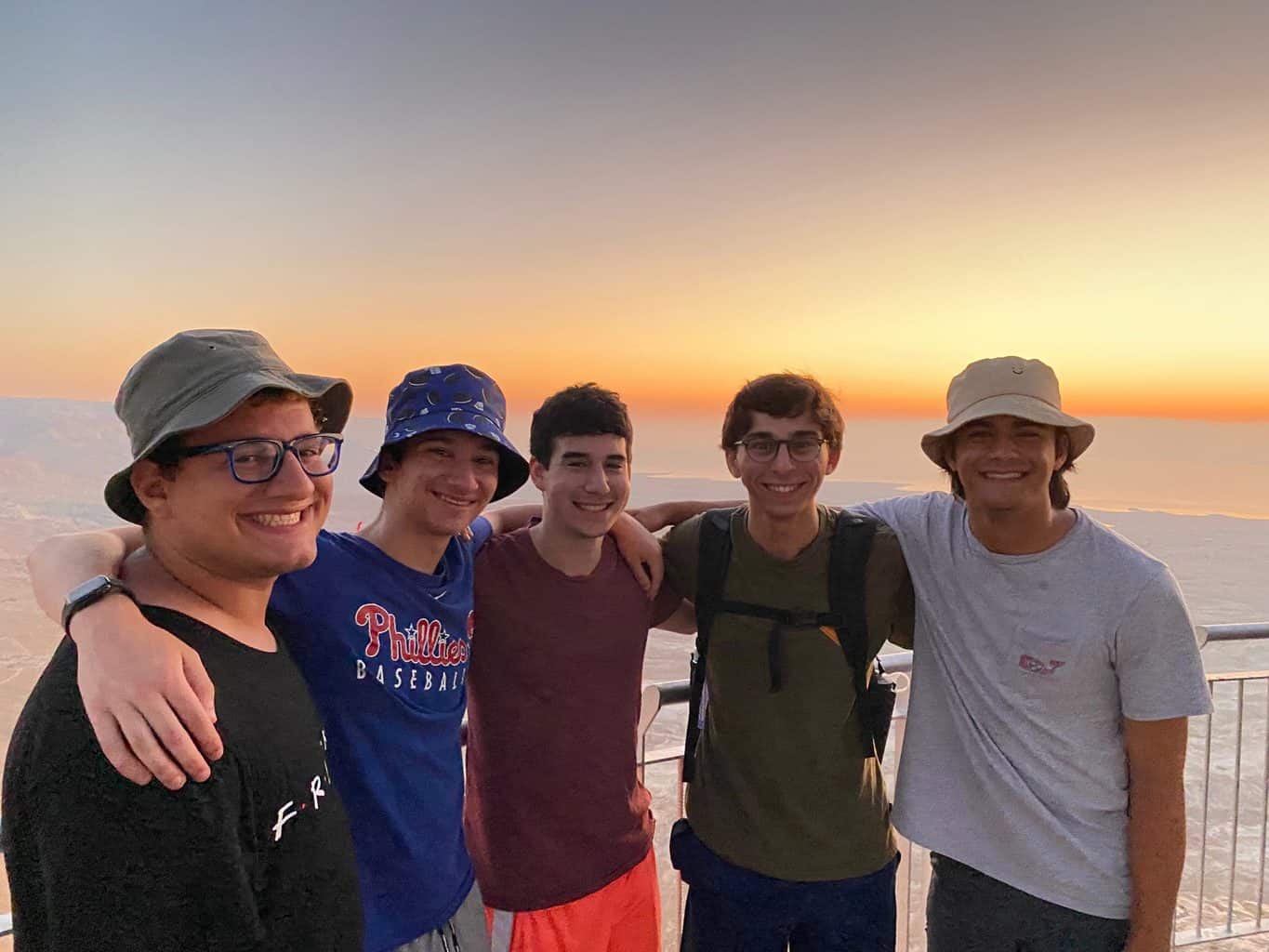 Jordan Infeld (pictured second to the right on top of Masada with his friends Louis Reagler, Gabriel Freedman, Micah Unowsky, and Jacob Shapiro), son of Dr. Jason and Stephani Infeld, is a senior at Memphis University School. Memphis Jewish Federation’s Lemsky Endowment Fund provided him with a Teen Israel Experience grant to help offset the cost of his NFTY summer program in Israel. All rising high school juniors and seniors in the Memphis Jewish community are eligible for grants up to $3,000 to attend a recognized teen summer or semester program in Israel. Teen Israel Experience applications for Summer 2022 are now available online. To learn more and apply, please go to: www.jcpmemphis.org/lemsky-endowment-fund.

This past July, I had the opportunity of a lifetime, a three-week adventure in Israel with other Jewish teens from around the Mid-South. We all gathered in Newark, New Jersey to fly to Ben Gurion Airport in Tel Aviv, Israel, an eleven-hour flight. On arrival, we went through the necessary security checkpoints in the airport, then drove to an office building in a nearby city, for a required COVID antibody test. Before the blood draw, we ate weirdly sweet cheese pizza from Pizza Hut in the parking lot of the office building. After the blood draw we arrived at the place we stayed for the first few nights while in quarantine.

Our hotel was in a community that can be best described as a zoo. There were pens of cows, goats, deer, and wild animals such as cats and peacocks. Exploring the area surrounding the hotel kept us entertained for the first two days before we were permitted to begin our adventures. The first week was a whirlwind of tourist activities from seven in the morning to six at night. We visited historical sites such as the Western Wall, King David’s Palace, and the biggest shuk (market) in Jerusalem.

The pace of our adventures kept up as we left the comfort of our hotel for a 3-night trip to the Negev Desert in the southern part of Israel. For one night, we stayed in the tents of the Bedouin, a nomadic Arab culture. That night, we rode camels and ate some of the best food of the entire trip.

The following morning, we left for my favorite part of the trip, the hike up Masada. Determined to be first in line, we woke up at three in the morning. As the gates to the park opened, we disembarked the bus and sprinted to the foot of the mountain. The 20-minute hike up as the sun slowly rose above the horizon was surreal. When we reached the top, we sat on the south side of the mountain and listened to our tour guide tell us the story of the Jews that had killed themselves rather than submit to the Romans two thousand years prior. The hike down was much harder than the way up. The trail was accurately named the Snake Path and was a very steep, windy, and rocky path. The heat of the newly risen sun made the hour hike feel like an eternity, but I would do it again.

We spent the next two nights camping in the cool night air of the desert. Early in the morning and late at night, we hiked various trails around the campsite. My favorite trail led to the top of a mountain where you could see settlements in Jordan, Egypt, and Saudi Arabia, and on the side, hidden by rubble, was an abandoned military sniper bunker. During the day, we visited the Dead Sea, the Red Sea, and the southernmost city in Israel, Eilat. The most disappointing experience of my trip was the Dead Sea. The 110-degree heat was unbearable, and the sea itself was no less than one hundred degrees. Although floating is cool, the immense amount of salt in the sea makes your skin feel like it’s on fire. After ten painful minutes, I had to get out and shower the salt off.

After our time in the desert, the trip began to slow down. We visited various cities in the northern part of Israel, sightseeing and shopping. In the last leg of the trip, we returned to Tel Aviv and Jerusalem. We made a final visit to the Western Wall, visited the military cemetery Mount Herzl, and had a night out at the ports of Tel Aviv. The trip concluded with the most disorienting thing I have ever experienced, another eleven-hour flight. We left Israel and arrived in the United States after eleven hours, but, on the clock, only four hours had passed. The next full day consisted of two more flights to finally touch down at Memphis International Airport after an incredibly memorable Israel experience.

Thank you to Memphis Jewish Federation’s Lemsky Endowment Fund for helping to make my NFTY in Israel summer experience possible.