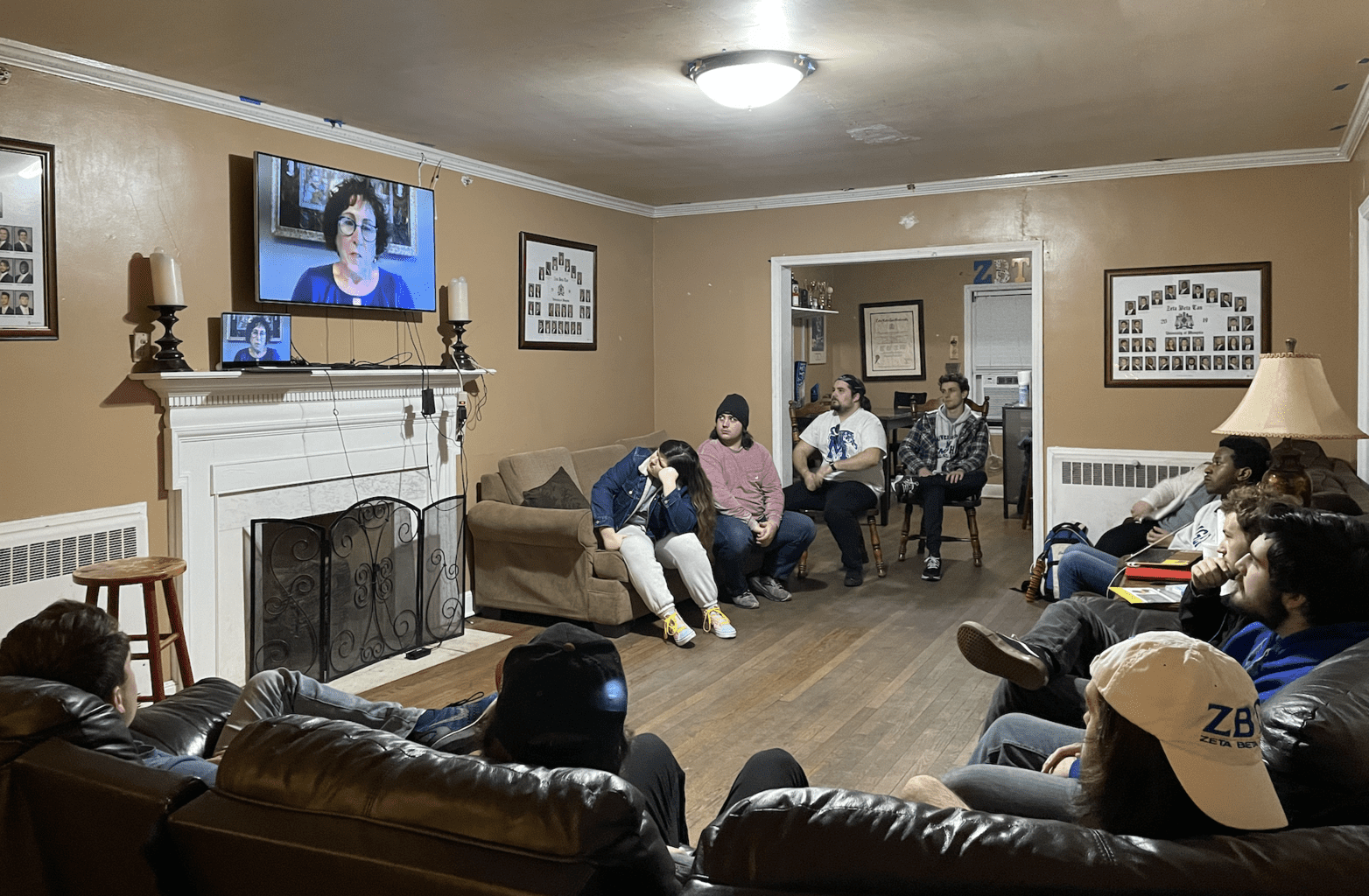 For years, the Zeta Beta Tau fraternity at University of Memphis has partnered with Hillels of Memphis to mark International Holocaust Remembrance day by bringing meaningful educational programing into the frat house. This year ZBT tapped Hillel Director Sophie Bloch to curate a program for a group of fifteen members and their friends.

Though recognized nationally as the very first Jewish collegiate social fraternity, Zeta Beta Tau (ZBT)’s local chapter on the University of Memphis campus hasn’t had a Jewish member for years. Despite this, the young men of ZBT strive to intentionally maintain connections to Jewish traditions and to Jewish Memphis through a key on-campus ally- Hillels of Memphis, a program of Memphis Jewish Federation.

For the last several years, ZBT has partnered with Hillels of Memphis to mark International Holocaust Remembrance day by bringing meaningful educational programing into the frat house. This year Joseph Duncan, Jr, the chapter’s Programming Director and a second-semester sophomore, tapped Hillels of Memphis Director Sophie Bloch to reflect on antisemitism and curate video content to screen for a group of fifteen ZBT members and their friends in late January.

“Since I have become the Director of Hillels in Memphis, Hillel and ZBT have worked together at least once a semester. However, I know that we have always had a close connection,” said Sophie. “It’s more important than ever for the Jewish community to have non-Jewish allies combatting antisemitism alongside us, and the only way we can do that is by sharing information, talking about it, and educating each other on its prevalence.”

ZBT’s Holocaust Remembrance day programming began with a conversation about the insidious role that centuries of European antisemitism had on driving the horrific inhumanity of the Holocaust. Sophie brought the discussion closer to home with two videos about antisemitism awareness, one produced by Hillel International as a part of Hillel’s new initiative to combat antisemitism on college campuses, and the other an entry in Memphis Jewish Federation’s Shine A Light on Antisemitism series, which debuted during Hanukkah. The full series can be found at jcpmemphis.org/antisemitism.

After finishing the videos, the students had the opportunity to cluster together in smaller break-out groups to share points of view and reflect on what they learned, closing on a solemn and reverential note, with audience members invited to read the names of six Holocaust victims, followed by six minutes of silence in honor of the six million Jews who perished in the Holocaust.

“Reading the names of Holocaust victims and learning more about their personal backgrounds was the most impactful moment from the program for me,” said Joseph. “You hear that there are six million Jewish people who lost their lives, but when you put names and sometimes even faces to it, it just has that much more of an impact.”

“The more we talk about antisemitism, bring light to it, and tell people it isn’t right, the more positive change can be made. It is going to take a lot of correction, and even then, some people will still not agree with us. With constant, deliberate action, we can work towards fixing that,” said Joseph.