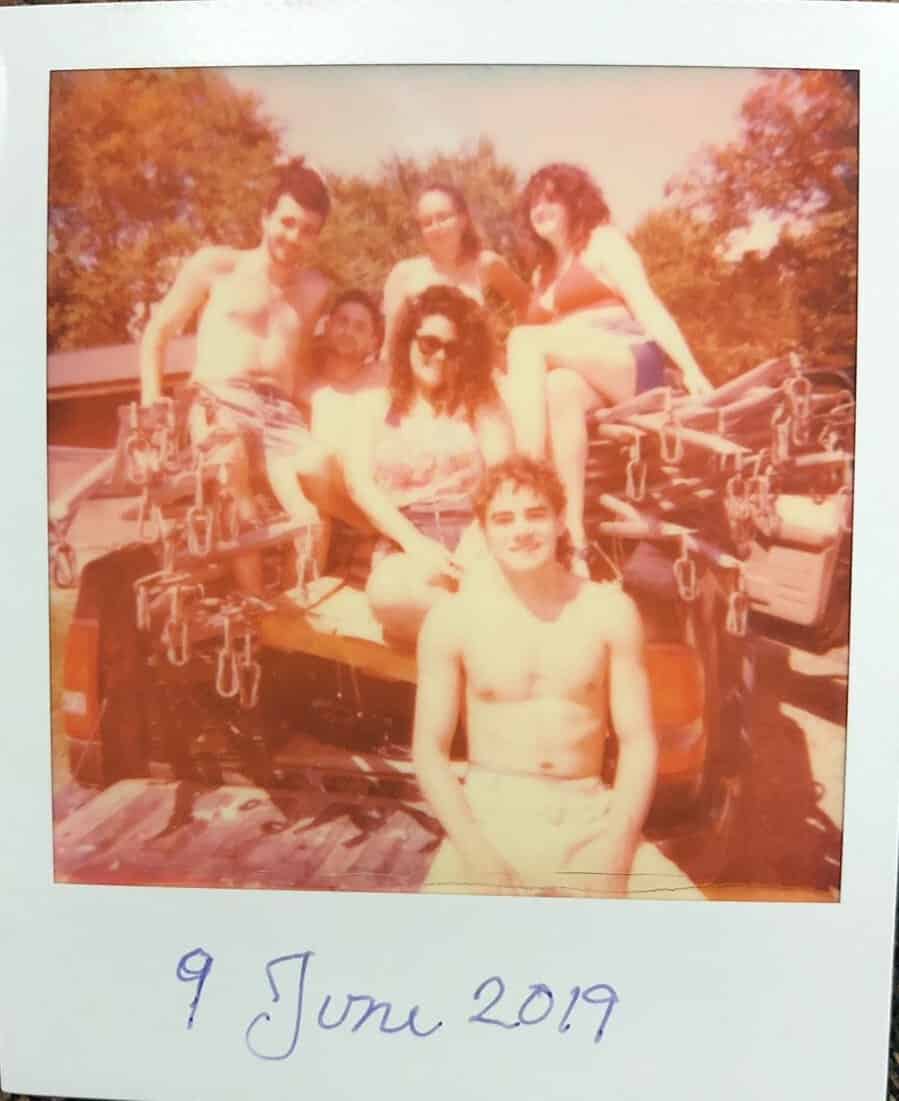 Through your donations to our Annual Community Campaign, Memphis Jewish Federation provides scholarships and other support to Jewish summer camps, Jewish schools, and MJCC’s day camp for hundreds of young Jewish Memphians each year, connecting our next generation to meaningful Jewish experiences that shape their future.

Aaron is our summer marketing intern. Learn more about him here, and enjoy his Polaroids featuring his and his fellow counselors’ summer camp shenanigans, published in this piece.

In the summer of 2009, my parents finally caved and let me go to sleepaway camp for the first time. I was eleven years old, and I was in awe of everything around me. I have spent at least part of every single summer since then at camp, as a camper until I was 16, then as a CIT, and as a counselor in later years.

I could not have understood at eleven years old how important camp was going to become for me or the reasons that it would become so important in the first place, but over the course of the past ten years I have begun to understand.

When approaching the topic of summer camp, it is easy to think of long-lost twins or slasher films, and be done with it. When looking at the public perception of summer camp, this is understandable. When this is your starting point it is easy to see why the next logical question would be, “What’s the point of this? Why do we keep doing this?”

The Jewish summer camp experience is recreated and improved every year with no small amount of effort expended. With a growing southern Jewish community it only follows that the growing number of Jewish youth need a growing and developing community to keep themselves plugged into.

Growing up in Memphis, TN, it was easy for me to completely gloss over the fact that many southern cities in America do not have such an abundant Jewish community as Memphis. Whereas Memphis has enough synagogues that it is easy to accidentally forget one off the top of your head, there are many smaller towns and cities nearby with only a single synagogue or none at all.

When the children from these single-synagogue towns arrive at camp for the first time there is every possibility that they are walking into the largest Jewish community that they have ever had the chance to be a part of. All of the sudden, the camp has become more than a camp. It is a petri dish that just so happens to be shaping the region’s Jewish community for the next few decades.

Seen this way, these summer programs become much more crucial in a sense. How do we impress the values of our community upon campers and share the knowledge that is traditionally passed down from one generation to the next before the session is over?

The knowledge that staff at Jewish summer camps have the power and responsibility to shape the minds of younger generations results in two main conclusions:

With so much potential and responsibility resting on the shoulders of – let’s face it – camp directors and their loyal armies of college-aged counselors, what are the winning results that we are hoping for? Are we hoping that for every camper that comes through a Jewish summer camp there is another Jewish young adult who will begin attending Shabbat services every Saturday morning? Are we trying to ensure that future Jewish community members will speak fluent Hebrew? Or are we trying to ensure the existence of our future Jewish community?

Maybe it’s all of these or maybe it’s only a handful of these reasons for any given camper who finds themselves at camp.

When you walk into a Jewish summer camp, the sense of community can be overwhelming. The sense of community may even overlap and confuse your understanding of the differences between community and family. With such sparse and remote Jewish populations spread so widely around the South, it becomes more important than ever that the communities that are developed and grown in this area be maintained and nurtured.

The campers arriving through the gates during the summer of 2019 definitely look, talk, and act a lot differently from the campers who arrived at camp during the summer of 1970. However, this is not the only change; camp itself has developed and grown, as well as its staff members. It is the responsibility of camp to maintain this steady growth in order to provide campers with a modern framework of Judaism for them to see themselves inside of and begin to live within.

It is for this reason that even the educational content presented by these camps has changed quite a bit. During recent summers, many Jewish summer camps have shifted focus towards the many aspects of social justice and social action.

Jewish topics of conversation can include the conflicts occuring in Israel, the growing LGBTQIA+ populations within Jewish youth, gun control, the prevalence of drugs and alcohol in younger and younger social circles, environmental issues, etc.

Kids taking a break from cell phones and technology for the sake of participating in camp are unable to completely erase their knowledge of the outside world; instead, they are able to use their social and societal context to participate in the programming developed by camp staff members. They are taught to form their own opinions and participate in discussions about topics that many adults might be nervous to breach with them in a more formal setting.

The community that is grown at camp is taught to take care of itself. Campers learn to talk with each other, live with each other, love each other, and take care of each other. In the process, they are given the opportunity to learn about the Torah, to meet Israeli staff members who bring the beauty of Israel to camp with them, to look at the normal summer activities they are a part of through a Jewish lens, and to meet new people their age who are going through the same experiences.

Aaron Salomon, 20, is a rising Junior at the University of Alabama. He is a Creative Advertising major in the College of Communications. This summer he is interning at Jewish Community Partners, contribution articles for the JCPConnect blog. He spends most of his free time reading, drawing, and listening to music. He’s a certified lifeguard, his favorite color is blue, and he’s read Harry Potter and the Half-Blood Prince 32 times.