ZBT Honors Memphis Chapter for its Partnership with Hillels of Memphis 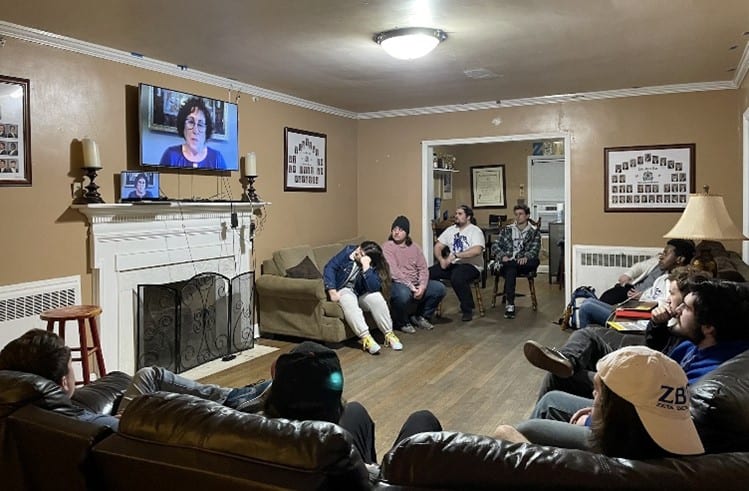 The Zeta Beta Tau (ZBT) fraternity chapter at the University of Memphis was recently recognized at their annual International Convention in recognition of their Jewish programming with Hillels of Memphis and Memphis Jewish Federation.

While it should be no surprise that a Memphis chapter was internationally recognized for its excellence, it’s worth noting that none of the men currently within the Gamma Mu ZBT chapter are Jewish. Instead, they are inspired by their chapter’s historical traditions and strive to maintain strong connections with their Chapter alumni and the local Jewish community.

Hillels of Memphis has long had a partnership with ZBT centered around various Jewish programs and events each year. Recent highlights include an annual Hamantaschen Bake during Purim, Challah Bake, and Interfaith Passover Seder. Hillels of Memphis is a program of Memphis Jewish Federation and is funded by donors’ gifts to the Annual Community Campaign.

Last year, Hillels of Memphis piloted a new partnership program in honor of International Holocaust Remembrance Day. At this inaugural event, students learned about the historical roots of antisemitism, contemporary instances of antisemitism on college campuses, and the importance of non-Jewish allies in advocating for the safety and support of Jewish students today.

ZBT members also watched the “Shine a Light on Antisemitism” videos produced by Memphis Jewish Federation last Hanukkah, which helped the students understand ways members of the local Jewish community have experienced and confronted antisemitism. Each person at the commemoration read aloud the name of six Jews who perished in the Holocaust and held a 6-minute moment of silence to honor the lives who were lost in this atrocity.

“Since I have become the Director of Hillels of Memphis, Hillel and ZBT have worked together at least once a semester. However, I know that we have always had a close connection. We are incredibly proud of the dedication ZBT has shown to maintaining authentic connections to its Jewish roots as an organization,” said Sophie Bloch, Director of Hillels of Memphis. “It’s more important than ever for the Jewish community to have non-Jewish allies combatting antisemitism alongside us, and the only way we can do that is by sharing information, talking about it, and educating each other on its prevalence.”

During the 2022 International Awards section of the convention, the University of Memphis’ Gamma Mu Chapter earned several of ZBT’s top awards and was among the finalists for the Brummer Cup, an award designated for the most outstanding chapter throughout Zeta Beta Tau. The chapter ultimately took home three awards for Excellence in Alumni Outreach & Programming, Outstanding Heritage Programming, and Risk Management. The chapter was also the runner-up for the Excellence in Chapter Programming and Outstanding Intramural Sports Participation and Performance awards.

“The Gamma Mu Chapter knows the meaning of Brotherhood for a Lifetime,” ZBT Chief Executive Officer Libby Anderson said. “Brothers worked very hard to succeed in the Standards of Excellence program this year, and the results are clear.”