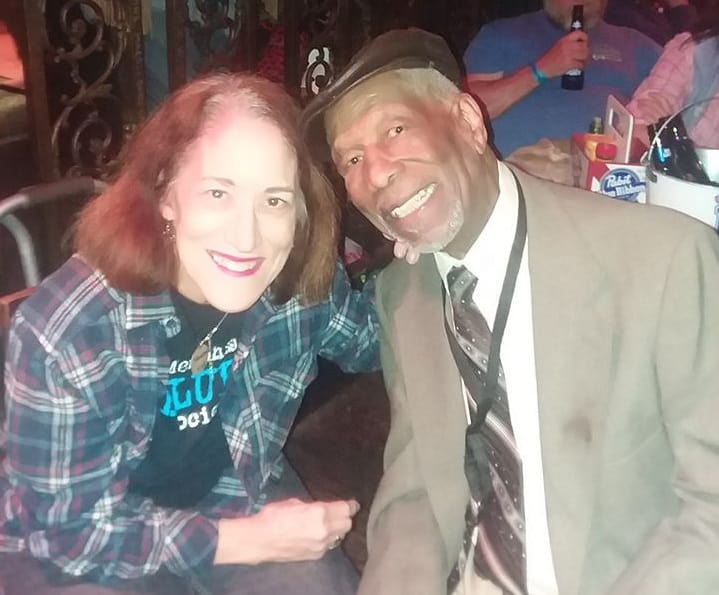 Featured image: Blues pianist Diana Kabakoff is pictured with legendary Memphis saxophonist Dr. Herman Green, at a birthday celebration for him at the Rum Boogie Cafe.

Memphis musician Diana Kabakoff has been a longtime donor to Federation’s Annual Campaign, grew up at Temple Israel, and has been actively involved in social justice issues across the community.  It wasn’t until she participated in Federation’s recent seminar “Racial Justice in Memphis 101:  During & After George Floyd” that she connected the dots with issues she cares about and the work of Federation.

“I didn’t think much about Federation beyond my annual gift, which I make because I’m Jewish and I’m part of the community,” Diana said. “I’m a free spirit and I don’t identify with organized stuff that much. But now I can think of Federation differently. I’m planning to attend more programming in the future.”

She told us that after attending the webinar, she understood more about the role Federation plays in connecting people to important conversations about our city and its Jewish community, particularly issues related to social justice, which fuels her passion.

“It sounded interesting because I’m profoundly interested in social justice,” said Diana. “I grew up at Temple Israel in the era of Rabbi Wax and my life has been spent in the Black community with friends. I’ve played at Black clubs. I met BB King when I was 30 and was the only white person there. I’m comfortable in that world.”

As a hub of connectivity and engagement in our Jewish community, Memphis Jewish Federation works hard to develop programming that pulls the vibrantly diverse threads of our community together.

In a typical year, events like Taste of Israel bring us together physically but that’s not the case in 2020. In this era of social distancing, we’ve relied on online programming to bring people together. This July, we’ve conducted a three-part webinar series tapping experts in Memphis and in Shoham, Israel, our partner city in the Jewish Agency for Israel’s Partnership2Gether program, to examine topical themes. The response was overwhelming with over 250 people attending the sessions.

Last week’s program focusing on Racial Justice was led by veteran Jewish communal leader and ardent social justice advocate Rachel Shankman, who helped found and led the Memphis branch of Facing History and Ourselves. The program was designed to help our Israeli friends understand more about what they were seeing in news from the U.S.

What we didn’t expect was the strong reaction from our Memphis-based audience, particularly people who don’t typically participate in Federation programming.

“For me, racial justice completely connects with my Judaism and my religious identity,” Diana continued. “To me, it’s the most profound part of Judaism. We’re all people first. We’re different ethnic groups but we’re people first, and we have more in common than we have differences. Now, I want to get in touch with the articles and books that Rachel mentioned, and I would also love to join another webinar like this.”