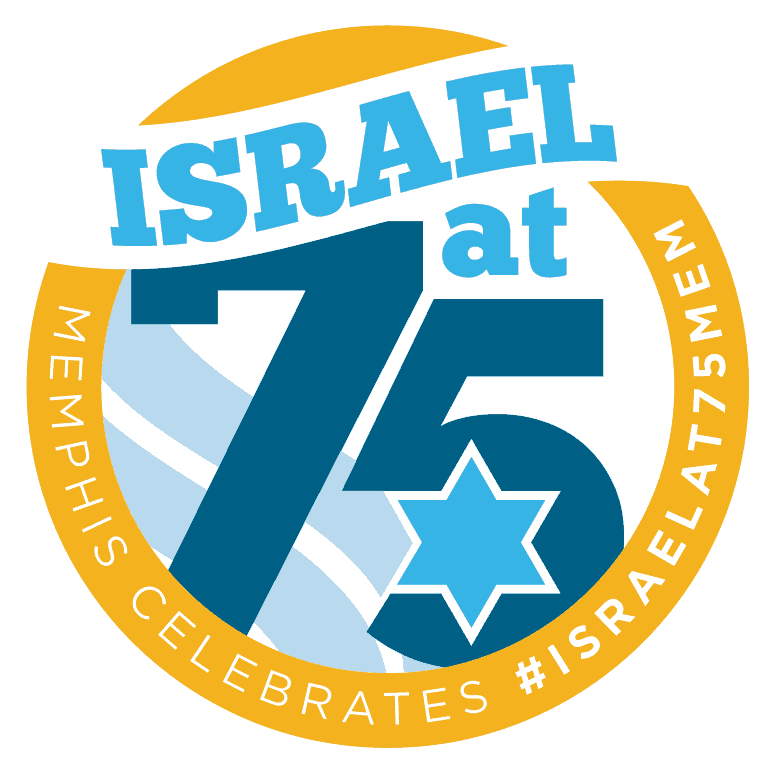 Familiarizing Jewish Memphians to the land, people, and culture of Israel is a major priority for Memphis Jewish Federation, and anniversaries are a great opportunity to do it in a big way. This year marks the 75th anniversary of the founding of the State of Israel, and to mark this significant milestone, Federation is rolling out a series of programs to celebrate Israel at 75.

“I’m excited about the slate of events we have, from small niche events to huge blow-outs reaching every corner of the community, and all so much in between,” said Jeri Moskovitz, Federation’s Israel at 75 Coordinator. “I’m sure there will be something to pique the interest of everyone in Jewish Memphis but even more than that, I’m certain that the year we have planned will bring Israel closer to Memphis in meaningful ways for everyone.”

Israel has been infused into events already on the community calendar such as adding sufganiyot (Israeli-style donuts) at Jewish Foundation of Memphis’ Latkes and Vodka event in December and serving Israeli cuisine at Federation’s Women’s Impact Luncheon in January.

In the upcoming months there will also be events specifically designed to highlight Israel. Two of those events are scheduled when representatives from Israel’s sister city, Shoham, visit in early February.  On Feb 7th, there is a Continuing Legal Education (CLE)-approved event for lawyers and Professional Advisors at Raymond James at 4:00pm with Shoham criminologist Dr. Ronit Peled-Laskov. A well-educated and captivating speaker, Dr. Peled-Laskov will present on how Israel deals with the rehabilitation of criminals, as compared to the approach taken in the United States. Moderated by U.S. District Court Judge Sheryl Lipman, the program is open to the entire community. Please RSVP your attendance to Carrie Richardson at crichardson@jcpmemphis.org.

Also, on February 7th at 7:00 PM, all Memphis Jewish teens are invited to an Israel at 75 birthday party at Beth Sholom Synagogue where Amir Sela from Shoham will lead a conversation about Israeli pop culture and music. The celebration will include birthday cake, of course. Please RSVP to crichardson@jcpmemphis.org.

On February 26th,  the Morris and Mollye Fogelman International Film Festival at the MJCC will feature the Israeli film, “Who are the Marcuses”, followed by a discussion with Rabbi Abe Schacter-Gampel and Paula Jacobson. The film delves into the lives of Holocaust refugees Lottie and Howard Marcus, who in 2016 left Ben-Gurion University of the Negev over a half billion dollars, the largest single charitable donation to the State of Israel in its history. The gift begged the questions: who are the Marcuses and where did they come up with this money? This documentary answers both those questions and examines the impact this gift has had on Israel’s vital water technology.

The community is in for a treat when on March 23rd, our own Alan Harkavy returns to Memphis for a “Conversation with Alan Harkavy: His Journey from Memphis to Israel.” Moderated by Karen and Jody Franklin, who have personally experienced touring Israel with Alan, the evening will include Israeli wine, stories and pictures.

The spring will bring additional events to celebrate our beloved Israel including a PJ Library birthday party, Israel at 75 Shabbat at the congregations, and a Lag B’Omer field day collaboration between the local Jewish Day Schools.  Jeri Moskovitz suggests you go ahead and mark your calendars for the adult community-wide celebration of Israel’s 75th Birthday on May 18th. “The goal of the night, in the spirit of the vastly successful ‘Taste of Israel,’ will be to transform Memphis Botanic Gardens to make you feel as if you have traveled to Israel without having to board a plane! Attendees will “travel” to different areas of the venue and visit different sites, sounds, textures, and flavors of Israel, whether it be music, food, wine, and even a shuk,” Jeri explained.

“Jeri and all the committees she is working with have planned a fabulous calendar of programs with something for everyone to celebrate this historic milestone in Jewish history,” said Federation Executive Vice President Bluma Zuckerbrot-Finkelstein.

For more information on any of these events, please contact jmoskovitz@jcpmemphis.org.