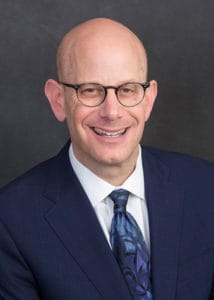 In the periodic series My Jewish Journey, community members share the story of their personal relationship with Judaism and Jewish identity. Told their way and in their words, these stories are as unique and distinct from each other as the storytellers themselves, and together will begin to tell the colorful and multi-textured story of Jewish Memphis.

Today, I am deeply engaged with the Memphis Jewish community, volunteering as a lay leader with local organizations as much as my schedule allows. I’m a Memphis Jewish Federation board member and serve as co-chair of its Annual Community Campaign and have a clear understanding of the many ways Federation supports every person and place in Jewish Memphis in some way. I am also an active member of Temple Israel and a former board member, as well as I am a past President of Plough Towers. But I often think of the path that led me here, and I am now able to track the course of my Jewish journey.

It began during a three-year period in the early 1970’s, when I was between the ages of 7 to 10 years old. It was during this time that I first became aware of my Judaism and began to understand its meaning to my family, the role that Memphis played in being Jewish, as well as our place in the overall world. Specifically, a series of events—some that were seminal moments in history, and some that were more personal—combined to influence me as to the importance of Judaism and the need to ultimately be active. Upon reflection, the lessons I learned then—50 years ago—still resonate today in our families, in the Memphis Jewish community, and abroad.

Three events which occurred in 1972 and 1973 highlighted to me how vulnerable we were as Jews. During my first summer of playing JCC T-Ball in the summer of 1972, all of the teams were pulled from the field one Sunday afternoon to gather with many in the Jewish community at the southeast side of the JCC to dedicate the Holocaust memorial which still stands to this day.

This was the first time that I had heard of the Holocaust, and I remember being confused when my parents explained to me that week that Jews were killed in Europe during World War II simply for being Jewish. Two months later, as I was just becoming a sports fan, I was glued to the Munich Summer Olympics when the 11 Israeli athletes were killed by Palestinian terrorists. Again, this was a jarring development, and I remember my parents being very upset over the tragedy.

One of the hostages, American David Berger, was originally from the town of Shaker Heights, Ohio, before making aliyah—the same suburb of Cleveland where my parents grew up before moving to Memphis. In fact, my grandmother knew David Berger’s mother. This news made a worldwide tragedy seem to be more personal and identifiable to me.

Finally, a year later, Israel was attacked on Yom Kippur, and the entire Memphis Jewish community rallied to support Israel in its fight for survival. Attending  a carnival organized by friends of my sister, Betsy, as a fundraiser for Israel, I was now part of the effort. At this time, I was a student at a Christian elementary school, and I realized that my non-Jewish friends were not affected by these events. The lessons that I learned were that—yes, we were a small vulnerable minority in the world. However, we were also tough, and we supported each other passionately both in Memphis and abroad.

During this time, my family began to celebrate Passover with some of my parents’ best friends—Judy and Morris Kriger and their family. As we didn’t have any relatives in Memphis, the Krigers were among our local family, and celebrating Passover Seders with them became a very fun and meaningful tradition that we looked forward to every year. From this, I realized that while Judaism could be serious, it could also be festive and fun with your family and with friends.

A couple of years later, my mother began to work at what is now known as the Wendy & Avron B. Fogelman Jewish Family Service. Soon after the Vietnam War ended in 1975, JFS was a participating agency in the effort to help Vietnamese refugees relocate to Memphis and begin a new life. During the summer of 1975, Mom dragged my sister, brother and me to the airport to welcome the refugees to Memphis, and then to help them move into apartments with supplies. These people didn’t know anyone in town, didn’t speak English, and didn’t have anything. Mom explained to us that as Jews, we gave back, helping not only our own but other people who were also in need. Besides, she explained, the Vietnamese refugees weren’t all that different from my relatives—specifically my grandfather and his siblings—who moved to the United States from Hungary in the aftermath of World War I in the early 1920’s.

Fast forward from my life as a young kid in the 1970s to my life as an adult today. The Memphis Jewish community that impacted my formative years is just as active today. In fact, most of the local agencies and institutions have impacted my family throughout our entire life cycle. My family continues to worship at Temple Israel, and my kids attended their preschool and kindergarten. The JCC continues to represent a focal point of Memphis Jewish life. Growing up in Memphis, my two sons experienced a Jewish Memphis that is in many ways even better than the one I experienced—they played  sports at the JCC and went to camp there. They also had the opportunity to attend the Bornblum Jewish Community Day School, which didn’t exist when I was a kid.

Thanks to Memphis Jewish Federation’s Lemsky Endowment Fund, they were able to visit Israel on BBYO programs while in high school. My father recently was at Memphis Jewish Home & Rehab to rehab a broken leg. Other friends have depended on Plough Towers, or even the Fogelman Jewish Family Service to be there for them during times of need. We all know the expression “To whom much is given, much is expected.” The Memphis Jewish community is an incredibly unique and special community. We are blessed and fortunate to have a community that is giving, connected, spiritual, and fun. In one way or another, every Jew in Memphis has benefited from this community. Ultimately, it’s up to us to protect our community so that it’s here for the next generation of Jewish Memphians to experience these same benefits.