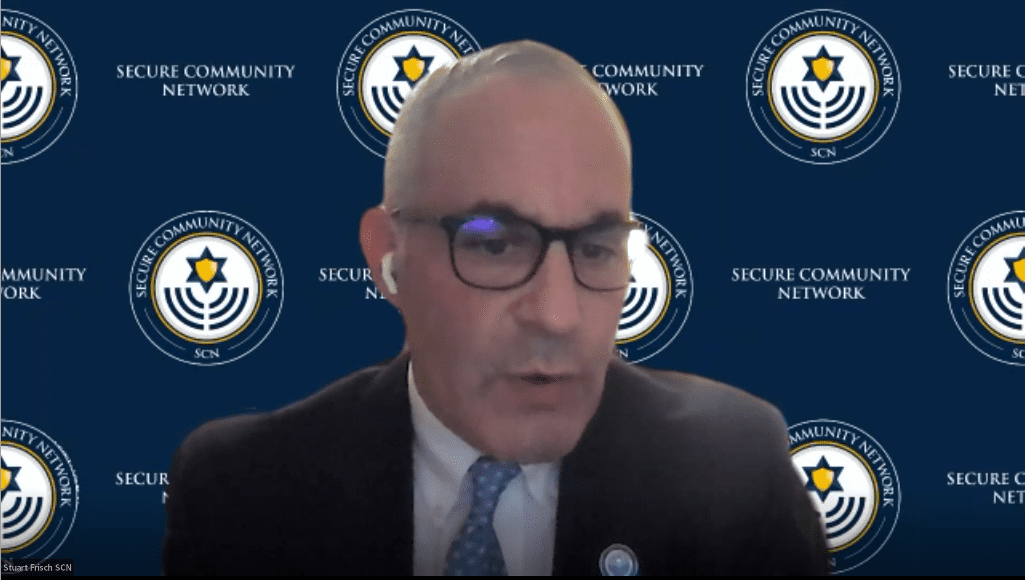 “One loss of life is to destroy the world entire- we believe this as Jews. And to save one life is to save the world entire. Most of our efforts are to keep these threats to Jewish lives out of our buildings,” said Stuart Frisch, Secure Community Network (SCN) National Training & Exercise Advisor and former Regional Security Director under the partnership between SCN and Memphis Jewish Federation.

Frisch was speaking to an online audience of more than 150 households Tuesday, January 25 during a Federation-hosted Community Security Briefing. Mounted in response to the hostage crisis at Congregation Beth Israel in Colleyville, Texas, the program was designed to inform Memphis Jewish community members about the partnerships with local law enforcement and specialized training programs that keep the people and places of Jewish Memphis safe, through the Federation/SCN partnership. Since launching in Memphis in 2018, the partnership has spread to other communities around the nation and is credited with saving lives in Texas.

Representatives from Federation, SCN, the FBI, Memphis Police Department, and the Department of Homeland Security spoke about the relationships supporting the web of security measures protecting Jewish Memphis, and shared insight on the role saturated and standardized training played in the escape of all hostages in Texas, as well as its potential to save lives in Memphis in the event of the unthinkable happening here.

“While Jews represent less than 2% of the population, the very ugly statistic is that almost 60% of faith-based hate attacks target Jews, which is why security is and must remain at the forefront of the collective mind of the leadership of the Memphis Jewish Federation and all of our community institutions,” said Craig Weiss, Federation’s Vice-Chair of Security and an active lay leader and philanthropist in the community. “Federation and SCN’s partnership was the first of its kind in Jewish communities nationwide, and in fact among all faith-based communities. We can be proud of how far we’ve come, from a wide-open community with little to no security infrastructure or preparedness to truly being a model community and an example for others around the country.”

“Members of faith communities should not have to worry about the threat of violence at their services or places of worship, spaces meant for sanctuary. It’s one of the most heinous acts of violence that can be committed,” said Special Agent in Charge Douglas Korneski who heads the FBI’s Memphis office. “The unfortunate reality is that we can expect the Jewish community to continue to be targeted by hate crimes and extremist violence from threats that are complex and evolving and forged of blended ideologies. These threats demand that we work closely together to keep communities safe.”

Working closely together is what the Federation/SCN partnership is all about. From their Chicago HQ, SCN analysts and security professionals constantly monitor intel as it comes to them from partners in local, regional, and federal law enforcement. This information is shared on a need-to-know basis with security advisors and directors embedded in Jewish communities across the United States.

Regional Security Advisor (RSA) Amanda Braswell fills that role in Jewish Memphis, meeting regularly with SCN analysts, FBI agents, MPD officers, and DHS operatives to ensure all agencies share the same vital information. A law enforcement professional with over 20 years of experience, most recently as a detective with the Germantown Police Department investigating financial and computer crimes, child exploitation, and digital forensics, Braswell stepped into her Federation/SCN role in 2021.

“The SCN analytics team is the backbone of this whole operation. Their reporting back to RSAs like me are vital to staying ahead of threats,” Braswell told the audience. “You may wonder why we need a local response to an event that is happening somewhere else. Locally, we are concerned with the unknown. As something like this is unfolding we must ask, ‘Is this a coordinated attack? Could there be copycat attacks, or attacks by sympathizers of the cause?’ We don’t know until it can be confirmed that this was an isolated event.”

“So we rally the troops,” she said. “I was in touch with every law enforcement agency represented here tonight for the entire day of the attack to anticipate any local threat.”

“Amanda can lean on me (when she needs the MPD), and hopefully I’ve been able to answer her questions or point her in the right direction,” said Memphis Police Department Lieutenant Colonel and Jewish Community Liaison Derrick Bernard. “As Liaison, my main focus is making sure the lines of communication are open between the MPD and the Jewish community. I’m Amanda’s direct contact that she can reach out to and connect her to resources she might need. MPD’s partnership with the community focuses on collaboration on trainings, information sharing, community outreach, and working together to address the issue of hate crimes. It’s all about prevention. But if something were to happen, our command staff is focused and ready.”

Frisch addressed the audience toward the end of the program, stressing the importance of wide-reaching and uniform training and sharing information about upcoming trainings for Memphis Jewish community members, both in-person and online.

“While we know that the tent of Abraham and Sarah was open on all four sides, we are still compelled as Jews to balance openness and inclusivity with the need to secure our Jewish facilities, our houses of worship, and our community centers to ensure they are here for the next generation of Jews in North America,” said Frisch. “That was proven in tragic fashion a few weeks ago in Colleyville, Texas.”

“Our trainings teach security skills as a life skill,” he continued. “We train people to not only detect danger before it becomes dangerous, but also how to react to a threat once it’s inside of a building. They are location agnostic, which is to say they are not only for houses of worship but for restaurants, movie theaters, our children’s schools, gas stations, ATMs. For any public spaces, this training is applicable.”

Federation and SCN are partnering on four training sessions in February and March with registrations open and accessible. Click here to register today. Information about other ways to play an active role in security in Jewish Memphis can also be found on the website, including the rollout of a new law enforcement outreach volunteer corps.

“With the Texas incident, I’m not at liberty to get into certain details as there is still an ongoing international investigation,” said Frisch. “But I can share some detail, like the rabbi throwing the chair at the attacker allowing the hostages to escape, which is an example of something we talk about in the training. What we saw in the publicly available details post-incident is this training saves lives.”