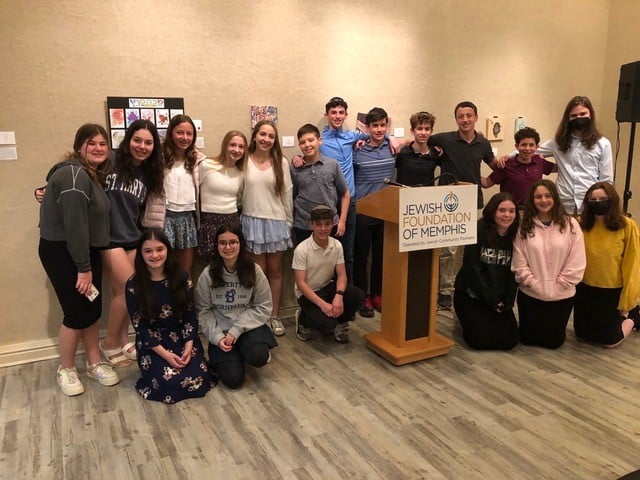 Jewish Foundation of Memphis B’nai Tzedek students gathered on March 21, 2222 to award grants to six local Jewish organizations, funding 9 programs with a total of $10,000. In May, the teens made gifts from their individual tzedakah funds.

When it comes to individual tzedakah money, B’nai Tzedek students have a history of giving to non-profit organizations they are passionate about. B’nai Tzedek, the teen philanthropy program at the Jewish Foundation of Memphis, provides our Jewish community’s teens with the knowledge, tools, and passion for philanthropy. In March 2022, the teens granted out $10,000 to six local organizations through a collaborative grant-making process, and in May the teens decided where to donate money from their individual tzedakah funds.

Jewish teens join B’nai Tzedek by donating $250 of their Bar or Bat Mitzvah money to the Jewish Foundation of Memphis, establishing a Donor Advised Fund in their name. This $250 contribution is matched by the Foundation, giving the student a total of $500 to donate towards any non-profits in the United States before they graduate from high school. Others, like grandparents or other family, or even the teens themselves, can add funds to their accounts, giving them more potential to make a meaningful impact, and learn valuable lessons about the power of giving.

“I want to support the Memphis Jewish Federation with its mission to help Ukraine,” said Wallis R., a student at St Mary’s Episcopal School. Wallis, along with other B’nai Tzedek students, was inspired by the war in Ukraine to donate to the Memphis Jewish Federation, who distributes funding to the Jewish Agency for Israel which is helping war refugees make Aliyah to Israel, and the Joint Distribution Committee who is providing humanitarian aid on the ground. This was no surprise as the students collectively granted $1,000 to support the crisis in Ukraine back in March.

Evan S. joined the B’nai Tzedek program in 2018 and recently graduated from Memphis University School. One of the organizations he chose to donate to was BBYO, and specifically the Delta region. “I chose to donate to BBYO because for the last four years BBYO has provided me with incredible leadership opportunities, Jewish identity-building experiences, and a community and network of friends from all over the world. It only seemed fitting to give back to the organization that has let me thrive as myself,” said Evan.

Other local organizations supported by the students included Girls on the Run Memphis, Jay Uiberall Foundation, and the Forrest Spence Fund. Although not local, many Memphis teens attend Camp Sabra, and its Scholarship Fund was another recipient of B’nai Tzedek support.  Donations to national organizations included World Central Kitchen, Planned Parenthood, Boy Scouts of America, and Friends of Roots.

“B’nai Tzedek is a great way to learn about tzedakah,” said Sarah VanderWalde, Director of the B’nai Tzedek program. “Any teen who has become Bar or Bat Mitzvah is welcome to join B’nai Tzedek and the summer is a great time to fill out the online form. This way students can be enrolled before we start meeting again in the fall.”