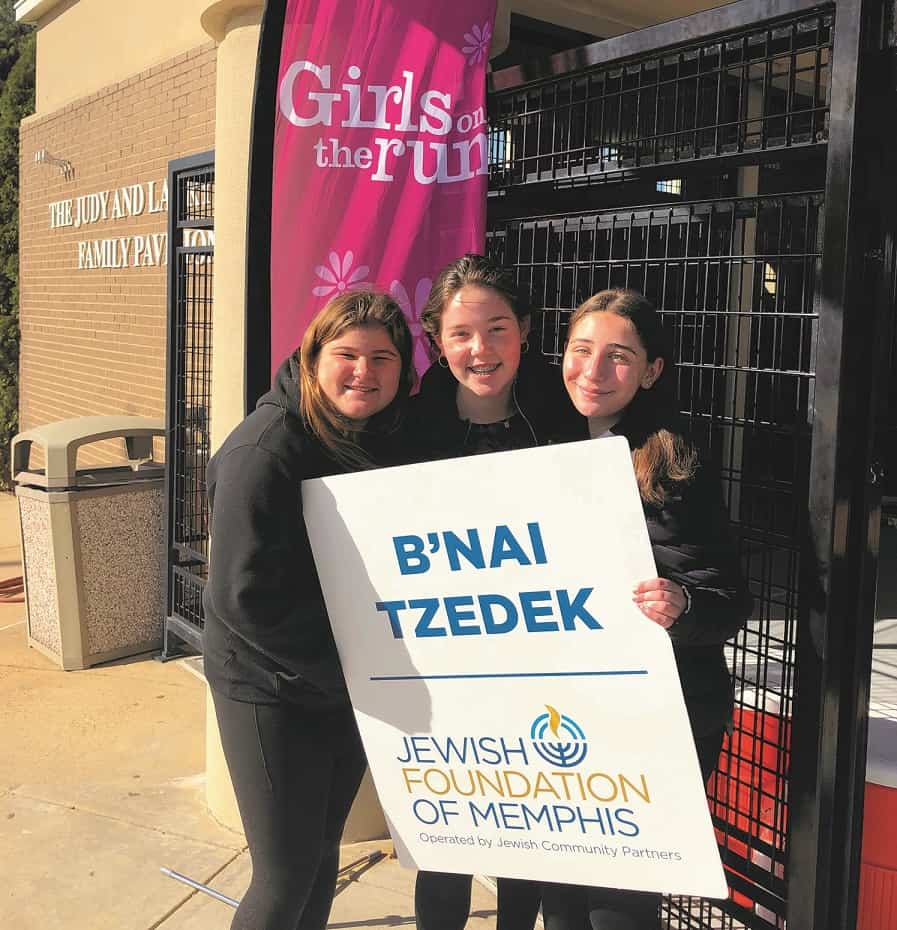 Above: Jewish Foundation of Memphis B’nai Tzedek teen volunteers Talya Mendelson, Brooke Sanderson, and Morgan Schrier supported the Girls on the Run 5k race on November 10 at the MJCC.

As the Jewish Foundation of Memphis gets ready to celebrate its 25th anniversary in 2020, its teen philanthropy program, B’nai Tzedek, is gearing up too. Founded in 2002, B’nai Tzedek teaches Jewish teens to become philanthropists and this year the teens will be busy with both philanthropy and volunteering.

Sarah VanderWalde, Endowment Development Manager at the Jewish Foundation, has assumed the role to lead the B’nai Tzedek program. Under her leadership, she is introducing a new component to B’nai Tzedek: hands-on volunteering. The program will join existing volunteer opportunities and create new ones in partnership with Rashki Osina, Program Manager and Therapist at Wendy and Avron B. Fogelman Jewish Family Service.

On November 10, 2019, several B’nai Tzedek members came out to the Memphis JCC to support young girls running the Girls on the Run 5k race. The teens held signs along the race course to encourage the girls to keep going. One teen even ran part of the race to motivate a young girl to keep jogging.

“I love being a part of B’nai Tzedek,” said Brooke Sanderson, a 7th grader at the Margolin Hebrew Academy. “Not only am I learning about how to give back with money but it is also allowing me to volunteer. I had a great time helping out at the Girls on the Run race and can’t wait to do more to help others in the community.”

The next volunteer activity is scheduled for Sunday December 15 to support Memphis Jewish Federation’s PJ Library program. Teens will help the PJ Library families make Chanukah crafts and play dreidel games at the Benjamin Hooks Library from 3:00-4:00pm.  More volunteer dates are being planned for 2020.

Teens join B’nai Tzedek by donating $250 of their Bar or Bat Mitzvah money to the Jewish Foundation of Memphis. This money is used to establish a donor-advised fund in their name.  A generous donor matches each teen’s $250 donation, so there is automatically $500 in each fund.  This money can be used towards any non-profit in the United States and the teens choose where they would like to donate.

An additional part of the B’nai Tzedek program is deciding as a group how to allocate $10,000 (endowed by an anonymous donor) to local Jewish agencies.   Memphis Jewish non-profits are invited to submit grant proposals for this money. In 2019, 15 agencies submitted over $43,000 in requests. The granting cycle for 2020 will open in January 2020.

The next meeting for the teens will take place on December 5, 2019 at 6:00 pm where they will create the 2020 grant application. Any teen who has become Bar or Bat Mitzvah can join B’nai Tzedek at any time.

To be a part of the B’nai Tzedek program, fill out the online form, or contact Sarah VanderWalde at for more information.