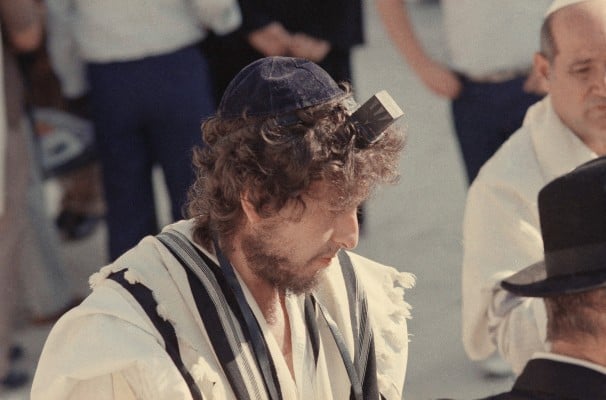 Citing Dylan’s “new poetic expressions within the great American song tradition,” the Swedish Academy has named the iconic Jewish singer/songwriter as the winner of this year’s Nobel Prize in literature, the first artist known primarily as a musician to claim the prestigious prize.

Over a career spanning more than half a century, Dylan has given hundreds of songs to the world, many steeped in Jewish imagery and whispers from the Torah. It’s no surprise, either. Born Robert Zimmerman, his father was president of Hibbing, Minnesota’s B’nai B’rith, while his mother served as president of the local Hadassah. All four grandparents were immigrants from Eastern Europe, and spoke Yiddish at home. As an adult, Dylan even sent his kids to the same Jewish summer camp he himself attended as a teenager, and conducted private studies with rabbis.

We’ve rounded up three of his more Judaically-influenced tunes for your viewing/listening pleasure, spanning the many weird and wonderful phases of Dylan’s career. We’ll start with one that’s particularly unusual; Dylan performing ‘Hava Nagila’ for a Jewish telethon, seemingly in the early 80s. He’s joined on stage by his son-in-law Peter Himmelman and the actor Harry Dean Stanton.

“Oh, God said to Abraham, ‘Kill me a son!’ / Abe says, ‘Man, you must be puttin’ me on.” The Binding of Isaac makes a prominent appearance in the classic song “Highway 61 Revisited”, with Dylan’s version of the story occupying the first verse of the song. Here he is with his ace touring band, performing the song at a California festival about a week ago.

That’s the third verse of “Neighborhood Bully”, Dylan’s pro-Israel anthem from his 1983 album Infidels. The song came right after Israel’s controversial 1982 Lebanon War, a period of uncertainty for many Israelis, who were in an intense period of questioning their government’s actions toward neighbors. Here, Dylan uses irony to make his point about Israel’s right (and duty) to protect itself.